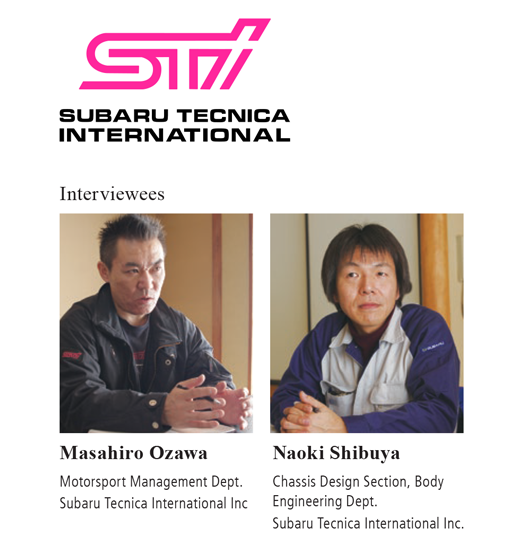 Established in April 1988, Subaru Tecnica International Inc. is in charge of Subaru’s motorsport operations. From 1990 it took part in the World Rally Championship (WRC), winning the manufacturer’s title three times. STI then shifted its focus to such events as the Super GT, Japan’s most popular racing event, and the 24 Hours Nürburgring, an endurance race popular in Europe. These events have enabled STI to continue its racing activities while demonstrating the superiority and performance of the production vehicles made by Fuji Heavy Industries.

Every year STI takes part in the 24 Hours Nürburgring endurance contest in which the cars race around a long, grueling circuit all day and all night. Kenwood’s digital radio system has enhanced communications between team members, giving STI an advantage over its rivals.

Communication between drivers and the team is critical if one is to win a race. But over such a giant course, the existing analog radio system proved unable to provide full coverage.

In 2008 Fuji Heavy Industries brought to a close 19 years of works participation in the WRC and, looking for its next motorsport project, its Subaru Tecnica International (STI) team entered the 24 Hours Nürburgring race of 2009.

To win a race vehicle components such as the engine, suspension and tires are of course important, but so too is communication – acquiring information on conditions and relaying this, requests and instructions between the pit, the drivers and other team members to ensure smooth coordination. Radios therefore play an essential role. The STI team first rented analog radios, but their range was very limited. The Nürburgring, however, has a total length of 25km making it far larger than the 5 or 6km of a regular circuit. In addition, this long course runs through woodland that absorbs radio waves. This meant that the pit crew could communicate with the drivers for only part of the circuit. Searching for a solution, the STI team turned to Kenwood, with whom they had been in contact since the WRC days. Kenwood was already supplying radios to a Formula 1 racing team.

What can we do to communicate more effectively and more reliably over the entire circuit so as to always ensure clear communications with the driver?

The challenging course of the 24 Hours Nürburgring

The 24 Hours Nürburgring race is an annual endurance race that takes place in early summer at Nürburg in Rhineland-Palatinate, Germany. The main event makes use of a 25-kilometer circuit comprising the modern 5km Grand Prix race track used for F1 competitions, and a 20km old course, the North Loop. The former is where the races start and finish, and the pit facilities are also located there.

While 25 kilometers may not sound much, most of that is on the old track which loops around a medieval castle and through forest while going up and down by as much as 300 meters. It also features over 170 corners. Moreover, the road surface is poor, making this one of the most grueling racing tracks in the world. And since the Nürburgring must accommodate over 200 racing machines for a period of 24 hours, conditions for radio communication are terrible, with interference being commonplace. When a driver is at the farthest point of the North Loop, quite often it is impossible to communicate with the pit staff using a conventional analog radio, thanks to the intervening hills and woods. This very difficult problem faces all the teams participating in the 24 Hours Nürburgring. 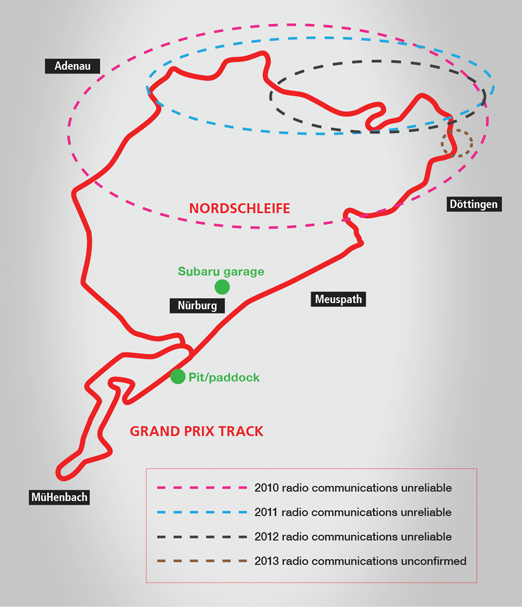 Multiple challenges posed by an endurance race over an unusual course
Communications during the 24 Hours Nürburgring between driver and pit staff – typically reports from the former, and formation instructions from the latter – are busiest on the final, all-out straight that completes the North Loop.

In addition, what distinguishes this from other endurance races is the high frequency of yellow flags, according to — Masahiro Ozawa of Motorsport Management Dept.

“For example, if a yellow flag appears here, from that point on overtaking is forbidden. Beyond that may be a double yellow flag, which on this circuit means the speed limit is 60km/h. And if a green flag is displayed, that indicates the end of a yellow-flag zone. The system allows on-line monitoring, but you don’t know where a yellow flag will pop up. It’s really difficult as one must be continually watching the screen and communicating with the drivers, relaying information that a yellow flag has appeared at such-and-such a location, or an accident has occurred somewhere. The drivers will see the flags of course, but being able to monitor the entire course and use the radio to pass them information as soon as it becomes available is extremely important – perhaps the most important way to prevent an accident.”

In addition to coping with regulations and conditions unique to this circuit, there is also the need for speed in relaying requests. If a driver is experiencing a problem, or wants to change tires, the crew only has between 30 and 60 seconds to make preparations for the next pit stop. It is crucial, if one is to reduce the stress on crew and drivers, to stay one step ahead, relaying information as soon as possible and being well prepared.

The limits of analog radios, and the decision to go digital
From 2010 Kenwood began working with STI. At the time, analog radios were in use, but Kenwood engineers were able to fine-tune these and gradually increase their effective range so that by 2012 coverage of the course was as much as 80%. Nevertheless, that still left 20% at the far end of the circuit which proved too difficult even for them. This area is actually quite important for team communications, both to ensure preparations are made for the next pit stop and to inform the pit crew of course conditions. So as the next step, it became essential to upgrade to a digital radio system if STI were to have a shot at achieving coverage over the entire circuit.

Digital radios customized to race specifications
What we proposed to STI in order to realize coverage over the whole circuit was the adoption of Kenwood’s NEXEDGE full digital system, including dedicated repeaters.

Within this cramped space, the driver must skillfully operate the color-coded controls while keeping careful watch on other vehicles and track conditions and looking out for yellow flags as he races around the course for a full 24 hours. By setting up duplexer filters and finding the optimal repeater locations, we were soon providing the sort of performance that STI had long hoped for. Also, the headsets are an important part of the equation, so we took a model designed for regular 2 PTT operation and customized it for use in car racing, making it very easy to use. As a result, the system achieved almost complete coverage of the circuit in the 2013 event, and the STI team enjoyed stable communications throughout.

Clear audio – the remarkable difference between digital and analog
As with full-circuit coverage, the adoption of digital radios also reduced stress for drivers and crew with its clear audio. The inside of a cockpit is an extraordinarily noisy environment. When analog radios were used, even if one could hear the other person talking the actual noise would be louder. Conversations took place amidst a continuous hiss. The only thing that was heard clearly was the squawk made when the other party gripped the microphone – you would know then that they wanted to say something.

As soon as the switch was made to digital radios, however, the difference in audio clarity was immediately clear – like night and day. Gone was the background noise. The noise canceller ensured that the audio was very clear and effective range was also improved. Where conditions were most challenging, the error correction made possible with digital technology helped to overcome this. True, the sound quality suffered a little, but not enough to be a problem.

Currently, the team is operating these radios on the 12.5kHz bandwidth, but they have the potential to realize even greater stability by operating on the narrower 6.25kHz bandwidth, which is a clear benefit of NXDN. 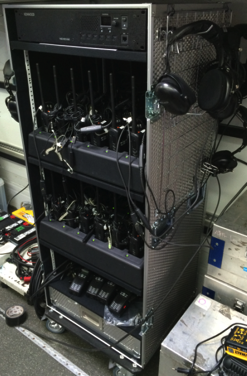 Realising stable communications with repeaters
When the digital radios were first adopted, two antennas were used. However, this system uses duplexer repeaters. From 2014, a single antenna was adopted for transmission and reception, and a repeater was installed in a trailer as an experiment. During that race about 30 radios were in use, including those in the garage, and this is the configuration the team plans to use again this year.

Non-stop battery use for 24 hours
When operating radios for a full 24 hours, it essential to have a good stock of spare batteries. In the STI pit, a battery charger is always placed in front of team members who most frequently have to use a radio. Spares are put on charge and at suitable opportunities they are swapped with a battery that has run down. Other members of the pit crew load multiple chargers with spare batteries, and each person takes responsibility for returning run-down batteries to a charger, so there is also a fresh battery available.

Recommending 6.25kHz narrowband operation
The 25-kilometer Nürburgring circuit presents huge problems for wireless communications thanks to the variation in elevation, the forest, and rough road surfaces. For example, the farthest section of the North Loop passes through woodland that is on the other side of a hill. Even in fairly challenging fringe areas, NEXEDGE can still operate using digital 12.5kHz transmission, but, depending on how bad the conditions are, users may hear the electronic sound produced by a voice codec. Nevertheless, the NXDN protocol used by NEXEDGE radios can also operate with half that bandwidth, 6.25kHz, and since this means the signal takes up only half the 12.5kHz bandwidth, sensitivity is further improved. The theoretical figure for coverage rises to x1.3 – in other words, a 30% improvement.

We explained to STI that, since sensitivity is enhanced with NXDN 6.25kHz operation, they can also expect coverage to improve. The team showed interest in this proposal and said they would like to try it for this year’s race.

More information as the key to victory
When asked if there was anything that they felt would improve the way they manage their race operations, STI expressed a keen desire for a system that, in addition to audio, relays information on vehicle status. Continually updated telematics data would, they feel, enable them to fine-tune STI team strategy and bring victory that much closer.

After the interview the STI team (Subaru WRX STI NBR 2015) took part in the 2015 24 Hours Nürburgring endurance race, achieving first place in the SP3T class for vehicles with turbocharged engines of 2,000cc or less.